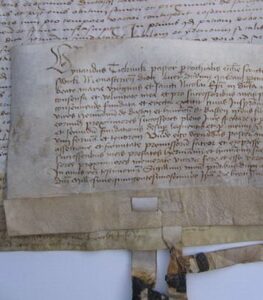 Transfix in deed of confirmation from 1502 of the establishment of the Vicarie foundation in 1501.

The foundation Vicarie Sancti Nicolai in The Netherlands

The Vicarie Sancti Nicolai is a late-medieval foundation that on a yearly basis provides allowances to students who emanate from the Van Basten Batenburg and Batenburg family. To this goal it manages its cultural heritage, keeping in mind the economical and social reality as it has changed since 1501.
The “Stichting Vicarie Sancti Nicolai van 27 october 1501” celebrated its 500th anniversary in 2001.

This page gives a short overview of the foundation and its main activities.

Goal
The foundation “Stichting Vicarie Sancti Nicolai van 27 october 1501” was established over 500 years ago in Winterswijk. This is a city in the eastern part of the Netherlands – in the province Gelderland – close to the German border (one hour driving from Arnhem).
Since 1605 the income of this mediaeval foundation is being used for the support of students who emanate from the Batenburg or Van Basten Batenburg family.

Request for Scholarships
Yearly the ‘collator‘ decides how many students will get an allowance. The collator can also appoint relatives who do not bear the name Batenburg or Van Basten Batenburg. The support will always be stopped at the end of the study.

If you are interested in a scholarship, please provide the secretary with the following information (by e-mail or post):

Since 2015 Eugene van Basten Batenburg from Beegden in The Netherlands, is the 29th collator since the foundation in 1501. He enjoys the honor to decide which students get the yearly scholarships. The collator is, according to old mediaeval rules, the oldest and closest male descendant of the founder in the male family line who is resident of The Netherlands. 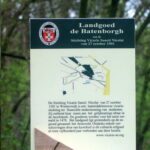 Road sign to country estate De Batenborgh close to the Arresveld at Winterswijk.

Properties
The properties of the foundation are the estate “De Batenborgh”, situated between Groenlo and Winterswijk in the Gelderland province The Netherlands, in addition to some stock investments. There is also a chapel owned by the Foundation.
Every year the treasurer produces a financial report. A copy can be requested from the secretary.